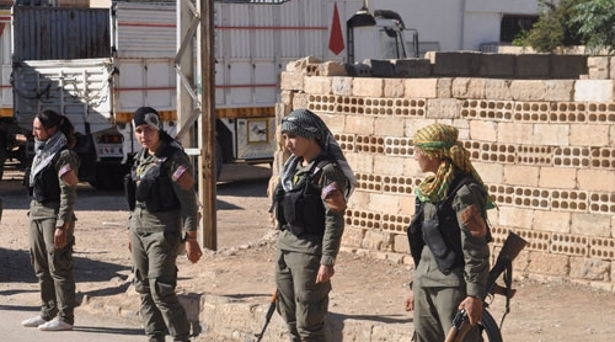 The Islamic state, ISIS, is known for its crimes towards humanity; genocide, war crimes, sexual violence and torture. At the moment there are at least 11600 foreign Isis women detained with their children in the camp of Roj, Aïn-Issa and Al-Hol in North East Syria, from at least 54 different countries, with an unknown future.

The Syrian ISIS suspects held by the SDF are being tried by the People‘s Defense Courts, where so far over 7,000 ISIS suspects have been tried and sentenced, and 6,000 more are waiting for a trial. There is no death penalty, following its abolition in North East Syria as the region gained autonomy from the Syrian regime, and the maximum punishment is 20 years imprisonment. The legal system in North East Syria grants access to a defense lawyer and the right to appeal, which is different to the tribunals in Iraq, where death penalty is still allowed and human rights constantly violated.

The majority of women and children have been detained in Al-Hol camp, a refugee camp in the Hasakah region of North East Syria, which now has pushed it to its breaking point. Food, medical care and education are provided in the camps, but the increased amount of people has caused several difficulties. The camp costs over $700,000 a day for the Autonomous Administration of North East Syria, which is a huge sum to find. Now that sum has been cut off from the wages of the Syrian Democratic Forces and other local employees, in order to keep the camp working. International charity organizations want to work at the camp, but are facing difficulties because of the lack of North East Syria’s political status.

Some countries, as the United Kingdom, Germany, Austria, Finland, Denmark and Kyrgyzstan, have discussed or moved towards revoking the citizenship of their citizens held in North East Syria. Revoking citizenship makes it easy for powerful nation-states to pass on the responsibility and the security issue to less powerful nation-states and to the Autonomous Administration in North East Syria.

The SDF has warned that if people that have lived under and/or supportet ISIS are left in the present situation without any long-term political perspective to solve the problem, they are facing many security risks. For example the constant threat of Turkish invasion means that the detainment or the security of ISIS prisoners can’t be guaranteed.

Also women’s participation in ISIS has to be investigated. Many western media sources has portrayed them as victims, but women played a key role in ISIS by doing logistical, administrative and military work. Pushing Isis’s ideology to their children creating a multi- generaltional terror organization or as recruitors online for new foreigners. They were also involved in the moral police, who controlled every women’s behavior and appearance in daily life. Women needed to follow strict rules according to their interpretation of Islam, in order not to receive harsh punishments. Women in the so called IS were able to fight – they secretely received military training in the Kattibah, a military training base for women, in order to “defend” their home. Each foreign woman joining the Islamic State were getting obligatory military training, many of them were present in the front line during fightings. Some of the women that have surrendered to SDF in the end of their operation in Al- Baghouz admited that just until recently they were active IS-fighters.

We need to stop seeing women only as victims. After that being said, we can not deny that there were also women who were kidnapped and forced to marriage. But the women need to be investigated as well and in case their culpability in ISIS’ crimes can’t be proved, they should be rehabiliated and returned to their societies.

Fear is a powerful tool to control opinions, and that’s what many western nation-states has been using in the question of returning the ISIS fighters. But it must be understood that this problem can not be left only to the hands of the Autonomous Administartion of North East Syria for reasons concerning security and resources, also because the survivors of ISIS violence deserve justice. Still, ISIS is not just a problem of middle east, but of the whole world.

Countries are also reluctant to bring ISIS suspects home because of the fear that their national laws and resources are not enough to sentence the repatriated ISIS member. That is why ISIS members need to be brought to international tribunal, that can specialize on cases like this. In order to be able to provide sufficient evidence and hear the witnesses, would the best option be to hold the tribunal in North East Syria or Iraq. But because of Iraq’s government human rights violations, establishing the International tribunal to North East Syria would be a better option. A local tribunal would also make the justice more visible for the survivors of ISIS’ violence.

The Autonomous Administration of North East Syria can not be left outside from the negotiations. We need to acknowledge the work of the Syrian Democratic Forces (SDF) – they were trusted to lead the military campaign against ISIS on the ground, as well as to arrest and detain thousands of ISIS fighters in a humane fashion. The Autonomous Administration of North East Syria should also have a right to take their place in negotiations over the future of these fighters and the reconstruction of Syria. But they have been and continue to be excluded from meetings of the Global Coalition to Defeat ISIS and the Geneva process over Syria, which means that the international officials can’t know

what is happening on the ground, information that they need to overcome the continuing ISIS threat.

The people of North East Syria have been creating a peace and democratic experience in a war-torn area, showing an example of selforganization and democratic co-existence for the whole world. The world needs to recognize North East Syria’s political status as an autonomous part of Syria. As long as it’s political status is uncertain and threatened by it’s hostile neighbors, especially Turkey, justice can’t be served. Furthermore this situation makes it impossible to guarantee the secure detainment of thousands of ISIS prisoners, as well as the peace in the area.

At the moment Turkish goverment is threatening to attack the regions east of the Euphrates. We have seen the war in Afrin happening last year, where Turkey’s invasion and support of jihadists totally destabilized the region, allowing sharia law, torture and sexual violence, in an area that was one of the starting points for this democractic revolution. Also Afrin had been home to thousands of people that have been internally displaced since the beginning of the war in Syria. We dont want this to happen again. There’s the threat of a new war and without support from the international community, it will lead to a new rise of ISIS.